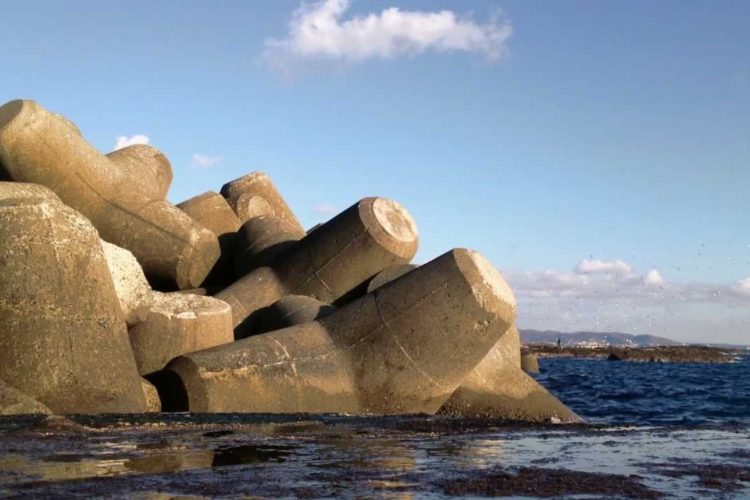 Ever wondered what those weirdly identical concrete blocks are by the sea? The interlocking concrete blocks are called Tetrapods. In coastal engineering, a Tetrapod is a four-legged concrete structure intended to prevent coastal erosion. A number of Tetrapods are arranged together to form a porous barrier that dissipates the destructive power of waves and currents.

Although some may call Tetrapods an eye-sore, the work they do to protect the natural landscape is irrefutable. The main feature of the Tetrapod is the design, which is not found in nature. They are designed in a way which dissipates the force of incoming waves, due to their structure and weight; they can remain stable even in the most arduous weather and marine conditions.

Japan is at the forefront of Tetrapod implementation; with nearly 50 percent of its coastline having been either covered or altered by Tetrapods or other forms of concrete. After the natural disasters in 2011, the Japanese Government has been rebuilding, and part of this project has included erecting a stronger coastal defence.

Right on our own doorstep, Tetrapods have saved part of the North Wales coast in recent years. In 2012 a cargo ship was grounded just near the village of Llanddulas; it was grounded after it struck rocks, and was held in place by the Tetrapods which protect the local seafront area. This is a prime example of their usability. Not only combating coastal erosion due to waves, but also protecting against possible man-made erosion.

Tetrapods have been instrumental in the protection of the coast and many tourist attractions for a number of years. They are used to protect marinas, sea wall defences and waterfronts all over the globe.

As Tetrapods are extremely hard wearing they do not need to be replaced or repaired as often as some other favoured sea defences. Any concrete structure can become dislodged after a period of time due to the forces of nature. They are generally monitored by satellite imaging in order to track their possible displacement or changes in structural form.

Tetrapods can provide permanent or temporary protection, being extremely hard wearing, easy to install and having no need for specialist foundations. Whilst being predominantly used for coastal defences, Tetrapods can also be used for agricultural purposes, security compounds, car parks and domestic or industrial use.